Thanks for hopping over from Lycrawidow and welcome to my post for the Keep Britain Breastfeeding Scavenger Hunt Day 6 The People Behind The Breastfeeder; sponsors today include ARDO Breastpumps who are giving away a Calypso Single Breastpump, Breastvest who are offering an essential breastvest duo (1x black and 1x white) in your size and Mother Loves Cookies who are providing a box of delicious lactation cookies for our Grand Prize winner. Over £700 worth of goodies are up for grabs entries via the Rafflecopter at the bottom of this post. 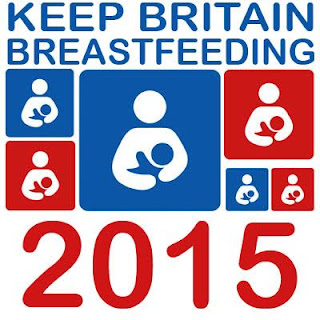 "As an close observer of my wife's breastfeeding journey, it is incredible to see how far she has come from the painful and tearful early weeks. She now breastfeeds with a confidence I would have found hard to believe if someone had told me in the first few months of our son's life. I remember telling her to give up trying, and to feed him formula because I found it difficult to watch her try again and again to get the "latch", and other such things right. She confidently feeds today, and seeks to encourage breastfeeding mothers, no mean feat."

"I asked my husband for a quote and he said, never eat yellow snow, after kicking him he said;I was really pleased that my wife was able to breastfeed. I was always told that "breast was best", and I want the best for my kids. There was also the added bonus that I hardly ever had to get up in the early hours to feed them, as we rarely had formula and bottles in the house."

"I am of the opinion that the child will end up the same regardless of breast or formula fed but I am supportive on that what you think is best for our children is what's right for us as a family and I will support you 110% on this. And I don't like night feeds so thats a bonus. Hashtag-plus-its-cheaper"

Georgina - The peer supporter who saved our breastfeeding journey!

My daughter was 4 days old when we trundled into the nearest baby café desperate for some kind of support, anything really, you know what it's like with the day 4 hormones sending you into a whirlpool of emotions. Nipples were throbbing, breasts were swollen and engorged and my daughter kept slipping off once latched. I remember crying as everything was so over whelming and everyone was so kind! The lady, who I'll refer to as A was running the support group and came over to speak to me, listened as I cried, showed me different positions to feed and gently suggested I attend the next La Leche League meeting as she thought E might have had a tongue tie (she did have a posterior tongue tie in the end). If I hadn't gone to that group on that morning and encountered that peer supporter I honestly think I wouldn't have continued breastfeeding. A was one of the main reasons I trained as a peer supporter myself. So I could help change the path of someone else's breastfeeding journey.

Another Bun - training as a peer supporter

After what was a difficult start, I enjoyed every moment of nursing my first baby. It was seeing the lack of support available and knowing the difference that good support can make to a breastfeeding journey that inspired me to train as a peer supporter. Being unable to commit to weekend training through my local NHS trust, I decided to train with the Association of Breastfeeding Mothers through their distance learning course. It was a real learning curve, and I was delighted to learn I had passed late last year. Even with my training, helping at a breastfeeding group, and having fed my first baby till 18 months, I still needed to call upon the support of a breastfeeding counsellor when my second baby arrived. Her reassurance was just what I needed, and made me realised I want to be able to broaden my expertise. Hopefully I will soon be starting on the breastfeeding counsellor course myself - it's a long slog (2 years) but it will be worth it!

I really struggled to breastfeed my first baby and if I hadn't have had support from the Infant Feeding Coordinators while I was in hospital I probably wouldn't have breastfed at all. I realised how crucial this support is, yet how hard it is for some mothers to access the help they need, so I trained as a breastfeeding peer supporter. I now get to pay forward the support I received by helping other mothers to breastfeed their babies too.

For more on the people behind the breastfeeder please hop on over Life with Baby Kicks "My Husband is My Biggest Fan" where you can also gain further entries into the grand prize draw. Full terms and conditions can be found on the Keeping Britain Breastfeeding website. UK residents only.

a Rafflecopter giveaway
Posted by Unknown at 06:00

We will do our best to respond to your comment as soon as possible.